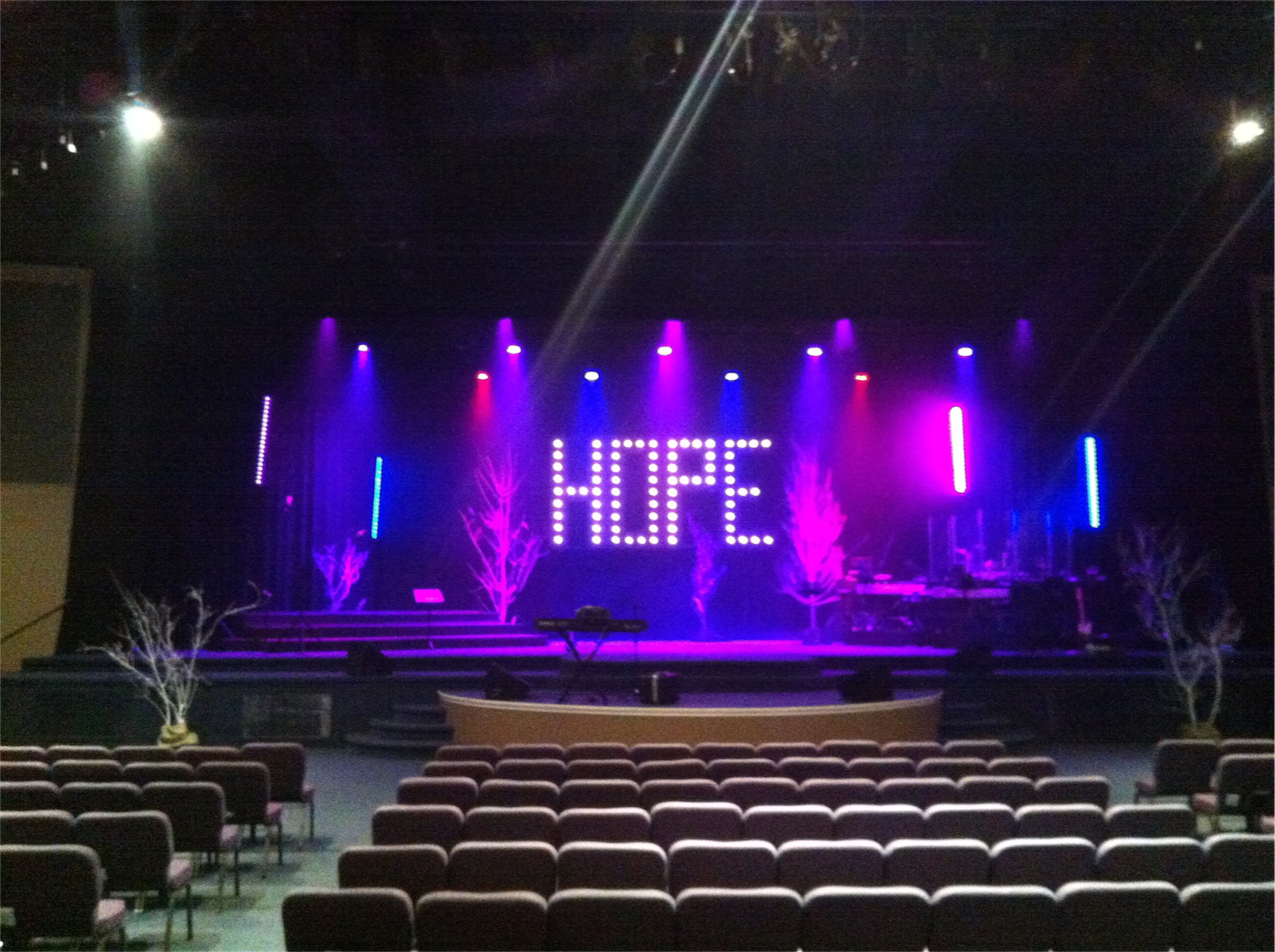 Setting up the right lighting on your church stage isn’t as difficult as you might think, and since you’ll likely get a pro to do most of the work for you, you don’t really need to get too specific about the logistics of getting your lighting all set up. You should, however, learn some basics so that you can have a hand in getting everything set up properly, and it starts with knowing a bit of the terminology and a few other things.

What Are the Lights on a Stage Called?

Just like many other occupations, acting or singing on a stage has its own terminology, and this includes the lighting. Different types of light have different names, but it helps if you start with learning the parts of a stage in general. When people say “stage right” or “stage left,” that describes the direction that the singer or actor sees when he or she is looking toward the audience. “Up stage” means the rear of the stage, while “downstage” refers to the front of the stage.

Since lighting often fills just one part of the stage, the term “general wash” is used when it fills up the entire stage. If the light illuminates just one area of the stage, it is referred to as “special” lighting, and of course a “spot” light highlights a single person or object.

The colors in the lighting also have names. Cold colors are all bluish lights, whereas pink, orange, amber, and red lights are known as warm colors. When light is used differently between cues, they also have special names. For instance, a “blackout” is when a set of lights fades out completely and the entire stage becomes dark. A “cross-fade” occurs when one set of lights fades while another set turns on.

So now, you’ll know what people mean if they say, “a cool special stage right illuminated the good-bye scene.”

What Is the Most Effective Angle for Front Lighting?

Any fixtures you use to set up in the front of the stage to highlight the faces of those onstage is called front lighting. On the surface, it is easy to learn to use this lighting; however, when you’re a beginner you might overdo it until you learn more about the basics and how the lights affect what you’re trying to do.

Setting the lights at different angles to get the effect you want can be a challenge, so let’s take a look at some of the basics. In many situations, the front lighting will be roughly 10 to 15 feet away from the front of the stage, at the most. But this doesn’t mean everyone should follow these rules. You can, in fact, experiment on your own to determine which angles will work best for you, which will depend on what’s happening on the stage.

That being said, if you keep your front lighting pointed down at a 45-degree angle, it will keep the lights from making it difficult for the people on the stage to see. In addition, it also eliminates most unwanted shadows that you sometimes have to deal with when putting on a production.

You can also use two lights instead of one per center-stage person, and tilt them at a 45-degree angle so that each side of that person’s face can be lit up. Even though you’ll have more fixtures to maneuver, it gives the process a lot more depth. For the rest of the actors or singers, use lights that are facing straight forward.

What Is Stage Wash Lighting?

When people talk about a “wash” lighting on a stage, it refers to a fill of light and color that flows evenly across the stage. In other words, when a wash occurs, the entire stage is filled with light. Often, lighting fixtures that emit soft lights are used to get this effect, as well as colored lights that use colored lighting gels. A “wash” and a “fill” are the same thing, and it is a more common occurrence than you might think. It’s just that you likely didn’t notice it was happening!

So what is the secret to creating a perfect wash? It’s best if you use multiple fixtures and keep them in fixed positions. That way, the light spread over the stage is a lot more even and therefore natural-looking. Space the lights themselves even distances apart, and their focus should be even as well. If the lights are hung on the same bar, this task becomes a lot easier.

If you can, overlap the lights at the edges so that no “gaps” occur and you get the appearance of full coverage. Remember, a wash is supposed to light up the entire stage, so the last thing you want is to see any dark spots there.

What Does PAR Mean in Lighting?

PAR stands for parabolic aluminum reflector, and a PAR can is often used in theatrical settings, including church productions. A PAR lamp is made up of a reflector, lamp, and lens that are sealed together in one compact unit. To some people, the unit looks like a can, which is why this device is often called a PAR can. There are different types of PAR lighting, including PAR-16 and PAR-20 lights, which are some of the smallest and used to accent retail displays thanks to their size.

On the other hand, when you need strong, uncontrolled light, you can go with the medium-sized PAR-36 and PAR-56 lights, which are used on many stages and even in the film industry. PAR lights tend to emit an oval beam of light that has soft edges to it, and the lens of the PAR cans determine how the lights spread out in the oval pattern.

Some companies are now making PAR lights with reflectors, lamps, and lenses that are separate instead of sealed together. This means you can change the beam spread simply by swapping lenses instead of changing up the entire lamp assembly. There are also PAR lamps that use LED lights to produce both white lights and colored lights, so the PAR lamps of today are definitely not like the ones a few decades ago.

Well hopefully you have a better idea of what you need for your church stage lighting setup.

Church Technology Superstore has a wide variety of stage lights for you to choose from for your church.

Choosing A Church Video Camera Package For Your Ministry

Free delivery to the United States